This is one myth that just refuses to die. A layman knows a simple fact that he/she needs to exercise hard and eat well to lose weight. Though this line itself has quite a loose end, we will not get technical about it. The focus is only on a single aspect, that this simple understanding has got quite a lot complicated now, for most people. But one stupid complication which has come out is the exercise and diet ratio.

There are clearly two camps here. The first one is the group that supports exercise and claims it to be the one-in-all, end-in-all concept to a fit body. Then there is the other camp, the now dominating one, i.e. the diet camp, which consists of primarily the dieticians, and some common trainers and people. For them, it’s the diet that matters the most. Worse, they claim that even if you don’t exercise, a good diet will cover it up all.

It is mainly the diet protagonists which have made these ratios of exercise and diet i.e. 70:30, 80:20, 75:25, etc. wherein the greater part is taken up by the diet. Now if you ask them a simple question “how did you come down to this exercise and diet ratio?” The answer is either a blank stare with a confused look on the face, which if you closely observe means “what do you mean by ‘why’?” Or, it is a common generic answer for many such questions i.e. “everyone says the same thing.” 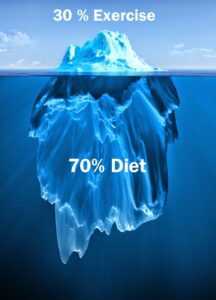 There is no ambiguity in the case of the blank stare, but in the case of the second answer, I always have a counter-question, which is followed by the blank look. My question to them is: “who is this everyone?” To get them to the right track, I ask them another question: “If you fall extremely sick, whom do you go to? The answer in all cases is – “The doctor”. I ask again, “why don’t you go to everyone then?”. Almost all get the point I want to convey.

Similarly, when you ask any dietician, as to where she got this stupid exercise and diet ratio from. She just cannot have an answer. This is not a scientifically designed ratio based on studies. This is simply a self-made exercise and diet ratio. Understand this thing, for a dietician, the primary earning is through diet recommendations. If she tells you that diet is not of much importance, or is of equal importance as exercising, she has a fear of losing her customer. Because dieticians are taking money to design a diet for you, they will, of course, emphasize on diet more. It’s their bread & butter. 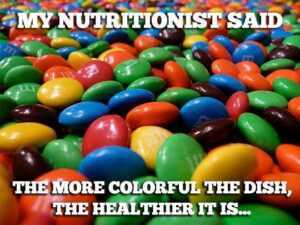 The ratio is always one, has been one and remains the same. The correct exercise and diet ratio is 100:100. Yes, you read it right. Its 100% diet, 100% exercise & overall movement, 100% sleep and relaxation. If any of the components take a hit in any way, the others will surely suffer.

I always tell my client a single point: “The human body is not made to sit and eat less. It is made to move more and eat adequately.” So if a dietician tells you, that there is no need to exercise, just follow their diet. Then the next step you need to take is, get up and walk off. A lot of people, who go on a low-calorie diet, as most dieticians are expert in giving you, you start losing weight on the weighing scale. But this is primarily water weight and worse muscle mass. There is a lot of difference is getting thin and getting fit. The challenge is to get fit and strong, not thin and weak; and this is what stupid diets do to you.

Michele Olson, Ph.D., professor of physical education and exercise science at Auburn University at Montgomery, Alabama, US, says that: “Yes, you can lose weight with diet alone, but exercise is an important component. Without it, only a portion of your weight loss is from fat — you’re also stripping away muscle and bone density. Since working out stimulates the growth of those metabolic tissues, losing weight through exercise means you’re burning mostly fat. The number on the scale may not sound as impressive, but because muscle takes up less space than fat does, you look smaller and your clothes fit better. Data show that to lose weight with exercise and keep it off, you don’t need to run marathons. You just need to build up to five to seven workouts a week, 50 minutes each, at a moderate intensity… Resistance training helps, too. But don’t just do isolated weight-lifting exercises like biceps curls — you’ll get leaner faster by using your body weight against gravity, as with movements like squats, lunges, push-ups, and planks. And, of course, beyond burning fat, people shouldn’t forget that exercise can have other impressive health perks, like improving the quality of your sleep, lowering your cholesterol and reducing your stress level.”

Then there are hardcore diet supporters, for e.g. Shawn M. Talbott, Ph.D., nutritional biochemist and former director of the University of Utah Nutrition Clinic, who says that: “As a rule of thumb, weight loss is generally 75 percent diet and 25 percent exercise. An analysis of more than 700 weight loss studies found that people see the biggest short-term results when they eat smart. On average, people who dieted without exercising for 15 weeks lost 23 pounds; the exercisers lost only six over about 21 weeks. It’s much easier to cut calories than to burn them off. For example, if you eat a fast-food steak quesadilla, which can pack 500-plus calories, you need to run more than four miles to ‘undo’ it!”

However, there is only one study that I could get my hands on which investigated the effectiveness of a commercial weight loss program to joining a fitness center for weight loss and body composition. The study was published in June 2008, in the Journal of Exercise Physiology, conducted by Stephen Ball & Anne Bolhofner. The study took a total of 43 overweight & sedentary women. 24 women received a 12-week membership to the Weight Watchers program, and 19 joined a local fitness center. The subjects under the Weight Watchers program had weekly weighed in sessions and were monitoring their calories daily. The fitness center subjects followed the American College of Sports Medicine guidelines, for weight loss. Outcomes included body weight (BW), body fat percentage (%BF) measured via the BOD POD, intra-abdominal fat (IAF) and subcutaneous abdominal fat (SAF), total cholesterol (TC), HDL, and triglycerides. The present study attempted to uncover what transpires in the “real world” when overweight women attempt to lose weight and improve BF by joining either a fitness center or enrolling in Weight Watchers. Although Weight Watcher subjects were able to lose a significant amount of weight and improve abdominal fatness, body composition did not improve after 12 weeks. A loss of FFM might be detrimental to long term weight loss maintenance. Furthermore, the results imply that overweight women joining a fitness center with the intent of weight loss or BF change will likely fail without altering diet. Additional support such as a personal trainer, workout partner, or life coach might also be beneficial. Neither program was successful at significantly altering the lipoprotein profile.

If you ask me about the statement “abs are made in the gym”, I would like to restate it, “abs are made, after you come back from the gym”. Diet is extremely important, and there is no doubt in this, but then lazy snob, eating less sitting on a sofa, will never ever be healthy or fit, just by being on a diet, neither can a person who is eating and exercising perfectly, survive without proper sleep and recuperation. Even the studies have shown the same, it’s a complete package. The human body doesn’t work in parts.

3 REASONS WHY EVERY DIET WORKS – BUT FOR A SHORT TIME

There are literally hundreds of diets and diet books in the world today. Most of these diet books have... read more

One of the major causes of deaths worldwide is road accidents and sleeping while driving is the most dangerous... read more

A lot of people have a question that is caffeine good for health. Some say that caffeine is an... read more

THE MYTH OF METABOLISM & AGE

When I consult people, it is heartening to know that, many people take their age and decreasing metabolism as... read more

One of the myths floating around in regards to coffee is that it dehydrates the body. So, is coffee... read more

Does chewing gum reduces face fat? Are you serious? But the problem is that this is not just a... read more

GAINING WEIGHT IN WINTERS IS A MYTH

We all remember the hardcore scenes of training from the movie Rocky IV where Stallone trains hard in the... read more

One of the major complaints I get from people, though not very often, is that whether coffee is acidic... read more